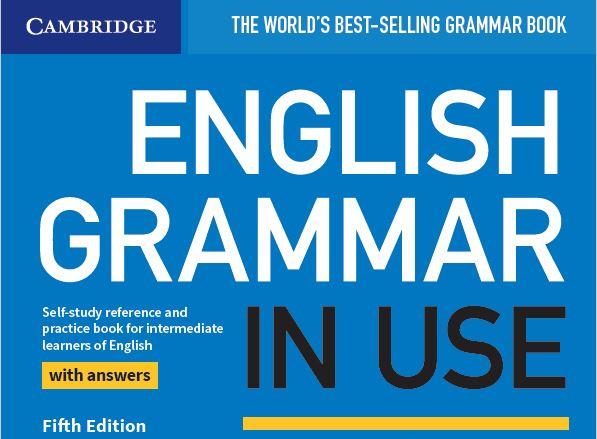 There are quite a few good grammar books available nowadays, but English Grammar in Use is still my favorite. A new fifth edition was published this year, and I will continue recommend it to students. Though it is advertised as a book for intermediate learners, I usually recommend it even to upper-intermediate and advanced students.

The 145 units in the book (and related appendices and extra exercises) make it a fairly comprehensive look at English grammar. With 34 years worth of revisions over the course of the book’s five editions some obvious thought has been put into how the information in the book is presented. It is remarkably easy to follow.

A moderate level of revision has occurred since the fourth edition was published in 2012. This seems to mostly have affected the organization of the exercises in the book, but the explanatory parts have been revised to some extent as well. On a shallower note, I’m happy to report that the illustrations in the book finally reflect a modern aesthetic – those in the fourth edition were not particularly attractive.

Overall, though, the book maintains the organization used since at least the second edition (the earliest I have in my collection). Each unit is two facing pages long. The left-hand page explains a specific grammar point, and the right-hand page includes exercises that students can work through. Answers are included at the end, though Cambridge does sell a version with those omitted. The seven appendices list verb forms, contractions, tricky spelling rules and notes about American English usage. There is also a study guide which might help students discover specific grammar points they should focus on.

Note that the units are grouped into logical chapters (present and past, modals, adjectives and adverbs, etc) rather than from “easy to difficult.” This isn’t a book that students work through from the beginning to end, but rather one where they focus on units covering their specific needs. The study guide might help, but they really need a teacher to show them the way. While the cover bills this as a “self-study guide,” it is better used as a supplement to classroom instruction or personal tutoring.

These activities pair well with Cambridge’s companion text English Grammar in Use: Supplementary Exercises. That book was updated in 2019 to match the new edition of the main text. Obviously, it provides additional practice which matches the units in the main book. Keep in mind, though, that it book lumps units together, and not always in chronological order.

A Note About Editions

There is also a version for Android and Apple devices, but it is based on the older fourth edition and the pricing kind of sucks – one free chapter (six units) and about $2.00 per chapter after that.

Cambridge also publishes Advanced Grammar in Use. It was last updated in 2012, but I am not familiar with it.

For my TOEFL Students

For the record, if I haven’t been able to properly identify which units a specific student should focus on, here are the chapters and units I suggest to them. I think reviewing them will help students to write effective TOEFL essays:

Obviously that just scratches the surface of English grammar, but it is usually a good start for the tasks students complete in the writing section of the TOEFL. Or maybe it is too much. Who knows?

Thanks a lot for your review.

I’m using that grammar, and it has helped me improve my English writing. The explanations are easy to get, and there are a lot of exercises for practicing. I have already used other grammars, but that is my favorite.

Awesome. I am glad that the book has helped!

[…] updated for 2019, this book complements the new fifth edition of “English Grammar in Use” by providing additional practice exercises for students to work through. And exercises are […]

[…] of this blog will know that my preferred grammar book is English Grammar in Use (5th Edition). You can buy it on Amazon. I usually recommend it to students who want to increase their writing […]

Thank you so much.